Cape May Stage, Cape May’s premier Equity theatre, has just announced the exceptional line-up of plays as well as incredible deals on subscription packages for the theatre’s 2013 season, which is, coincidentally, the 25th anniversary of this high-quality, award-winning professional theatre.  Therefore, not only does Cape May Stage promise to offer theater-goers a phenomenal line-up of comedies, farces and dramas, not to mention exceptional exclusives for subscribers, but look for surprises in this very special upcoming season. 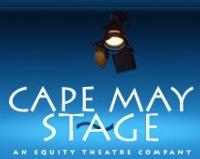 Oft-recognized as one of New Jersey’s “favorite” theatres, Artistic Director, Roy Steinberg, is ensuring that Cape May Stage remains such and is pulling out all the stops for the 25th season of this beloved theater that includes a world premiere, a Tony Award-winning play, a hilarious farce, a loosely-based biopic on two international scholars, and an annual holiday production.

Cape May Stage has been consistently earning glowing reviews and accolades, and with a few tricks up his sleeve, Steinberg is certain that 2013 will be its best season yet.

“Our patrons will not be disappointed with our main stage plays filled with laughter and a few tears, along with our usual fascinating performances and discussions of our well-received Second Stage Series,” says Steinberg.  “But they will be blown away with the yet-to-be-announced surprises and celebrity appearances in store for our silver anniversary.”

“How to Make a Rope Swing” by Shawn Fisher
A World Premiere Production
May 17 – June 7, 2013
Wednesdays – Saturdays, 8 p.m.
Sundays, 3 p.m.
The South Jersey town of Oakbranch is replacing the old schoolhouse. Two local elders have been selected to decide on a person after whom the new building should be named. As they come together, they rediscover the circumstances of their first meeting- a time when the school was first integrated and the region earned its nickname, “The Mississippi of the North.”  Within the brick walls of the century-old building, a long-suppressed moment in the town’s history surfaces and threatens to change the memory of the town and these people forever.

Winner of 3 Tony and 4 Drama Desk Awards, this side-splitting comedy will have you singing its praises! When a fiery-tempered, world-famous Italian opera star comes to town, he finds himself in a compromising situation giving an unexpected star the chance of a lifetime. Confusion and chaos ensue as the audience is in on the ultimate game of “who’s who.”  Passion, double entendres, mistaken identities and absolute hilarity send this award-winning farce to comedic heights!

Bernard is engaged to Gloria.  And to Gabriella.  And to Gretchen.  His extra-curricular lifestyle hits turbulence when all three invade his swanky bachelor pad in this high-flying farce from the swinging sixties. This 2008 Tony Award®-winner for Best Revival of a Play, is an uproarious jet-propelled comedy that had audiences and critics cheering in London and on Broadway.  Grab your boarding pass for a rollicking good time because “Boeing Boeing” is coming in for a landing this summer at Cape May Stage!

Psychoanalyst Sigmund Freud pioneered the Id, the Ego and the Superego. Writer C.S. Lewis created The Lion, the Witch and the Wardrobe. Two men, both brilliant, yet vastly different: Freud the atheist, Lewis the believer. In this new play, which has been drawing record-breaking crowds in New York, they meet in 1939 as England goes to war against the Nazis. Their evening of electrifying conversation about God, love, sex and the meaning of life will spark controversy long after the show is over.

Lee Blessing’s Pulitzer Prize-nominated drama, filled with unexpected humor and extraordinary humanity, is an absorbing, revealing and brilliant debate on the eternal hope and relentless futility of high-stakes politics. Two superpower arms negotiators — one a witty but cynical Russian veteran and the other an idealistic American newcomer — meet informally in the woods after long frustrating hours at the bargaining table. “A work of passion and power with the ring of political truth.” —Time

We all know the story of Ebenezer Scrooge…but whatever happened to his former business partner Jacob Marley? Chained and shackled, Marley is condemned for all eternity, but when a malicious little evil sprite offers a desperate Marley a chance for freedom, he accepts. But to escape his own chains, he must first redeem Scrooge.  So begins a journey of laughter and terror, redemption and renewal. This irreverent, funny, and, ultimately, deeply moving story retells Dickens’ classic with warmth and infectious zest. This rousing performance is sure to become a holiday classic for generations to come!

The 25th anniversary season of Cape May Stage is the ideal time to become a subscriber.  Cape May Stage season ticket holders become part of its ever-growing audience who enjoys the best seats, the greatest savings, and the gratifying intimacy of the restored, state-of-the-art Robert Shackleton Playhouse.