Photo credit: MAC
CAPE MAY – Shown here with MAC Curator Elan Zingman-Leith, a new treasure graces the mantel in the formal parlor of Cape May’s Victorian House museum, the 1879 Emlen Physick Estate – a bronze bust of Delila, from the biblical story of Samson and Delilah. The sculpture once belonged to Dr. Physick and was donated this fall to the Mid-Atlantic Center for the Arts & Humanities (MAC) by Dr. Physick’s heirs, the Brooks family. 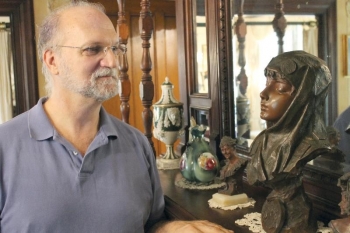 The sculpture is by renowned French sculptor Emmanuel Villanis (1858-1914), who was born in Lille, France, studied fine arts in Italy, then lived and worked as a sculptor in Paris. Villanis produced about 250 bronzes in his lifetime and is one of the most prolific sculptors of the late 19th and early 20th centuries in France. The bust of Dalila, circa 1900, is displayed on the mantle in the formal parlor, flanked by two small bronze female busts. This is an appropriate location for it, Zingman-Leith said, considering the Physick family had the formal parlor redecorated in 1900 in the prevailing French style.

“Real items that actually belonged to the inhabitants of the house keep the Physick Estate from becoming clichéd about Victorian life,” said Zingman-Leith. “The unexpected artifact shows how varied and interesting 19th century life is.”

The Brooks family donated the sculpture to MAC along with other items that belonged to the Physick family, including silver flatware, a large silver ladle, a silverplate egg warmer, kitchen cookery, two pictures of Dr. Physick and his sister, and others.

“These items enable us to talk about the lives that were led in this house, not just in general, but in particular, with the actual items that Dr. Physick owned,” said Zingman-Leith. “They help illustrate Dr. Physick’s position, his family, his social status, his inherited belongings, the technology available to him, and many other themes.”

Learn more about the Physick family and Victorian life on tours of the Emlen Physick Estate, 1048 Washington St., Cape May, offered daily.

The Mid-Atlantic Center for the Arts & Humanities (MAC) is a multifaceted not-for-profit organization committed to promoting the preservation, interpretation, and cultural enrichment of the Cape May region for its residents and visitors. MAC membership is open to all. For information about MAC’s year-round schedule of tours, festivals, and special events, call             609-884-5404       or             800-275-4278      , or visit MAC’s Web site at www.capemaymac.org.